A Dallas County woman is arrested on charges of threatening a teacher with a baseball bat at Keith High School in Orrville.

Video surveillance from the school — shows Latarsha Jones of Orrville walk down the hall with an aluminum baseball bat in her hand — approach a male teacher as he’s leaving his classroom — and begin arguing. 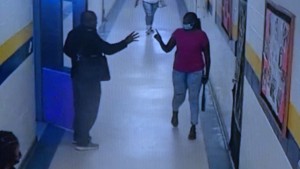 Sheriff Mike Granthum says it was over a pair of earbuds that a teacher confiscated from a student — who was wearing them in his class.

“Who in their right mind would come to a school with a baseball bat to confront a teacher about taking a product from a child that is not even supposed to be there to start with,” he said.

The video eventually shows a student run up — and take the bat away from Jones.

Police were called during the incident — but Jones was gone when the deputy arrived. 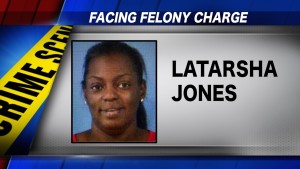 “Things that escalate beyond our capability happen at times. When they do, we follow our safety procedures. In this particular case, it warranted contacting law enforcement,” said Sampson.

“And we wonder why these kids are acting like they are? They’re just following their parent. Or their guardian or whoever’s raising them. It starts at home. And we gotta realize that,” said Granthum.

“But there’s nobody going to come into Dallas county and make a threat to one of these teachers. Not gonna happen.”

Jones is charged with Making a Terrorist Threat, a Class-C felony punishable by up to 10 years in prison.

Granthum says Jones was arrested Thursday — and taken to the county jail. But she’s since been released — on a $15,000 dollar bond.

Granthum says investigation remains ongoing — and there could be more charges.