TODAY AND THE WEEKEND: Today will be a sunny day with a high in the mid 80s, much cooler and more seasonable for this time of year. Tomorrow morning will be refreshing with 50s, the high tomorrow will be in the mid 80s with a sunny sky. Then, for Sunday, we expect a mix of sun and clouds, and we will mention the chance of a few showers Sunday afternoon and evening as another cold front moves through the state. Moisture will be very limited, and rain amounts will be light and spotty. The high Sunday will be in the upper 80s.

FOOTBALL WEATHER: Delightful weather for high school games tonight across Alabama; the sky will be clear with temperatures falling through the 70s.

Tomorrow, Auburn hosts Missouri at Jordan-Hare Stadium (11a CT kickoff)… the sky will be sunny with temperatures rising from near 77° and kickoff, into the low 80s by the second half.

Alabama will host Vanderbilt at Bryant Denny Stadium Saturday evening (6:30p CT kickoff)… the sky will be clear with temperatures falling from 81° at kickoff, into the low 70s by the final whistle.

HURRICANE FIONA: Very impressive looking storm on the satellite, and is very dangerous. At 500 AM AST, the center of Hurricane Fiona was located near latitude 33.8 North, longitude 66.8 West. Fiona is moving toward the north-northeast near 25 mph. A north-northeast or northeastward motion with an additional increase in forward speed is expected today. Some reduction in forward speed with a turn toward the north is forecast tonight through Sunday. On the forecast track, the center of Fiona will pass to the northwest of Bermuda during the next few hours. Fiona’s center will then approach Nova Scotia later today, move across Nova Scotia and into the Gulf of St. Lawrence on Saturday, and then across Labrador over the Labrador Sea on Sunday. 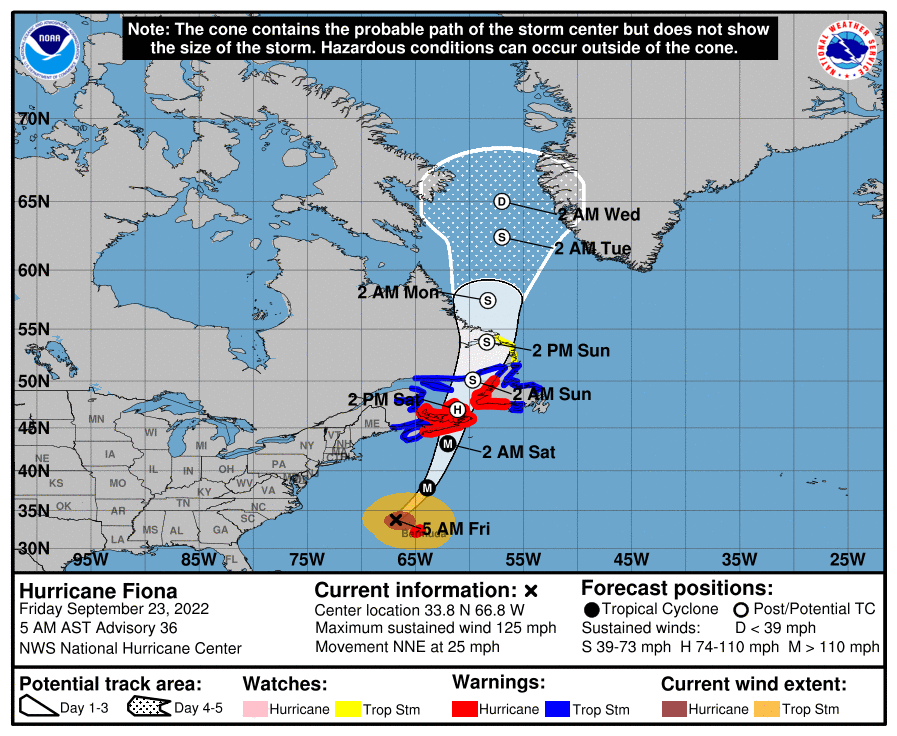 Maximum sustained winds are near 125 mph with higher gusts. Fiona is a category 3 hurricane on the Saffir-Simpson Hurricane Wind Scale. Some slight weakening is forecast today, however Fiona is forecast to be a large and powerful post-tropical cyclone with hurricane-force winds when it approaches and moves over Nova Scotia tonight and Saturday. Hurricane-force winds extend outward up to 115 miles from the center and tropical-storm-force winds extend outward up to 345 miles. Elevated automated stations on Bermuda are reporting sustained winds between 65-70 mph, with a maximum wind gust of 93 mph. The estimated minimum central pressure is 936 mb (27.64 inches).

TROPICAL DEPRESSION NINE: At 500 AM AST, the center of Tropical Depression Nine was located near latitude 13.9 North, longitude 68.6 West. The depression is moving toward the west-northwest near 13 mph. A turn more westward is forecast over the next next day or so followed by a turn back to the west-northwest and northwest by this weekend. Maximum sustained winds are near 35 mph with higher gusts. Only slow intensification is forecast over the next day or so, followed by more significant intensification over the weekend and early next week. The estimated minimum central pressure is 1006 mb (29.71 inches). 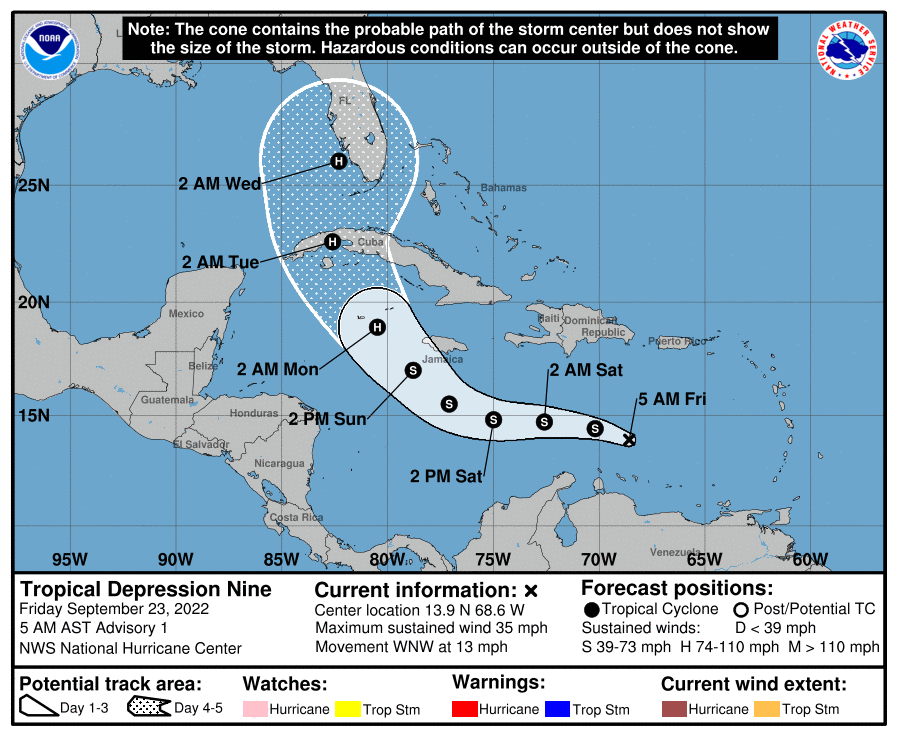 We do note the models over the last few hours are in better agreement about the system impacting the Florida Peninsula by the middle of next week and these model trends are encouraging about no impacts along the Northern Gulf Coast, but there is no way of knowing when or where this potential system heads. Over the next few days we will get better data from hurricane hunter aircraft, we begin to have a clearer picture of what might happen. Don’t cancel any beach trip, just keep an eye on it. This should become Hermine later today.

NEXT WEEK: Most of the week looks dry at this point with very pleasant temperatures; highs in the 80s, with lows in the 50s and 60s. Overall a very nice first full week of fall in Alabama.

Have an incredible Friday and weekend!!!
Ryan