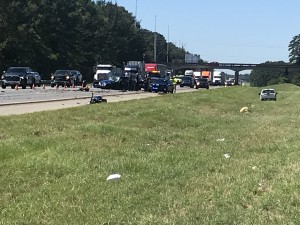 Montgomery police have now released the name of the man who was killed in a wreck on Interstate 85 northbound near the Bell Road overpass on Friday.

Police say 44-year-old Burtish Quarles of Montgomery was killed when the car he was driving was involved in a collision with an 18-wheeler at around 10:46AM.

The wreck backed up traffic for miles.

Police have released no details about what led up to the crash.