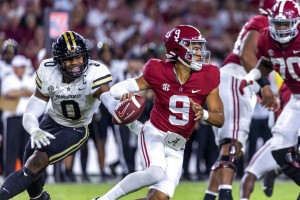 Alabama quarterback Bryce Young (9) works away from pressure from Vanderbilt linebacker Anfernee Orji (0) during the second half of an NCAA college football game Saturday, Sept. 24, 2022, in Tuscaloosa, Ala. (AP Photo/Vasha Hunt)

The Razorbacks’ 2006 win over the Crimson Tide came a year prior to Saban taking over at Alabama. Since his arrival, Arkansas has lost 15 straight to its SEC West Division rival, the Hogs’ longest mark against any opponent.

The 20th-ranked Razorbacks will get another crack at ending the streak Saturday when they host No. 2 Alabama.

Saban isn’t overlooking the Razorbacks, despite his success against them. Arkansas had the Crimson Tide on the ropes last year in the fourth quarter in a game Alabama won 42-35.

“Psychologically, I think everyone has to know this is the toughest challenge of the year,” Saban said.

Arkansas coach Sam Pittman and his Razorbacks rose to No. 10 in the AP Top 25 prior to a 23-21 loss against Texas A&M last week. The Razorbacks’ Cam Little bounced a field goal off the top of the right upright that would have given them the lead late.

“I see how they lost,” Saban said. “I’m sure they’re very disappointed. I’m sure they’ll be upset with the way the game ended.”

Pittman said for his team to have a chance at winning, it will take fearlessness. He pointed to last year’s close result as reason to believe Arkansas is up for the challenge.

“Bama, they can beat you before you even run out on the field,” Pittman said. “I think what happens when you play somebody close and you start having some belief that you know we got pretty good team … that’s where we’re at now with our football team.”

Alabama quarterback Bryce Young broke a 52-year-old school record by passing for 559 yards against the Razorbacks last year. He faces an Arkansas squad that has given up the sixth-most passing yards per game in the FBS.

In what will be Alabama’s first SEC road challenge of 2022, Anderson is not afraid of hostile environments.

“I tell people all the time, the audacity for the other team to even step on the field is disrespectful to me,” Bama star linebacker Will Anderson Jr. said. “I think people ask me what motivates me, and I say, ‘The audacity for the fans to show up and for the team to come step on the field and play.’ That’s my own little thing in my head that I do.”

Saban’s 96 career wins over AP Top 25 teams is the most in college football history. He is third in true road wins over ranked opponents with 25.