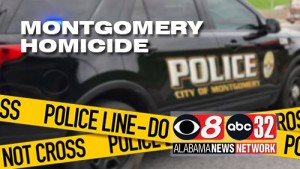 Montgomery police have launched a homicide investigation following a shooting that left one man dead and another injured on Sunday.

Police say they were called to the 1700 block of Pine Street at around 2:12AM. That’s where they found 23-year-old Reginald Woods of Montgomery and another man with gunshot wounds. Woods was later pronounced dead. The other man’s injuries are said to be life-threatening.

Investigators say the shooting happened near the intersection of Taft and Malvern streets.

They have released no other information.