A Marion man is dead — and a murder investigation is now underway — after a stabbing at a Marion apartment complex.

It’s the first murder committed in the city of Marion — in the past several years.

“He had been stabbed in the neck area. He was down, he died on the scene due to the injuries,” said Bufford. 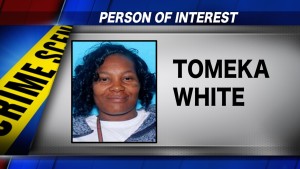 Forty-three year old Tomeka White was detained as a person of interest in the case.

White and the victim had been involved in a volatile — off again — on again kind of relationship — over a number of years.

“She admitted to what happened. It was a situation where they’d been dating off and on for a long period of time. They are no stranger to each other,” Bufford said.

“In fact they were kind of living together here.”

Bufford says information in the case is limited at this time — due to the sensitivity of the case.

“We called in the State SBI. We can always rely on those guys. They do a super job. Right now, information is very limited. The case is still under investigation. And so, we don’t want to jeopardize, jeopardize the integrity of the case.”