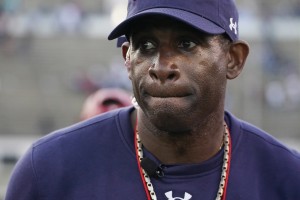 Sanders did his fair share of talking in the week that led up to his team’s win, dampening the Hornets’ homecoming festivities. After the game, the coaches met at midfield for a handshake and Sanders went in to embrace Robinson but was rebuffed with a stiff-arm, leaving the former two-sport star shocked.

Sanders, known for self-promotion during his playing days in the NFL and Major League Baseball, made comments last week about the Hornets picking Jackson State for their homecoming opponent — a role that is infrequently filled by proverbial giants.

“It was brilliant to invite us there because you’re going to make some money,” Sanders said. “But what comes with money?

Robinson, who played at Alabama State before an 11-year career in the NFL, didn’t appear to appreciate Sanders’ comments prior to the game and and was miffed Sanders didn’t greet him before the game.

“I thought there was a lot of disrespect the whole week,” Robinson said. “We didn’t talk in the pregame, I was out there the whole time on the 50-yard line. He walked through our whole end zone, he came the long way around to his side of the field in the pre-game, I thought that wasn’t classy at all.

“You’re not going to come here and disrespect me and my team and my school and then want to bro hug me,” he added. “Shake my hand and get the hell on.”

Here is what happened between Eddie Robinson Jr. and Deion Sanders at midfield. pic.twitter.com/Xs0gDDjGou