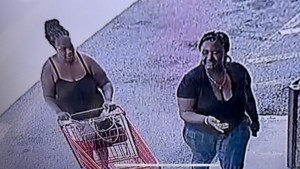 Central Alabama CrimeStoppers is offering a $1,000 reward in the hopes of solving a man’s murder in Montgomery.

Montgomery police are looking for the person who shot and killed Adarius Felder on September 9 at the Midtown Oaks Apartments in the 3500 block of Carter Hill Road.

If you have any information regarding identity these two females or the murder of Adarius Felder, call CrimeStoppers at (334) 215-STOP.