Young vs. Hooker: A Huge Quarterback Matchup If It Happens 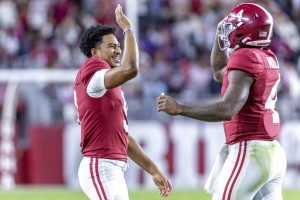 It could well be among the marquee quarterback matchups of the season: Alabama’s Heisman Trophy winner Bryce Young vs. Tennessee’s own emerging candidate, rising star Hendon Hooker.

Or it could be Jalen Milroe and Hooker instead.

Young’s sprained right shoulder was being re-evaluated on Monday, but coach Nick Saban was cautiously optimistic about his status for the third-ranked Crimson Tide’s game Saturday at No. 6 Tennessee.

“Hopefully we’re going to try to get him ready to play this week, but this is something that, you know, nobody can predict how quickly this is going to give him an opportunity to go out and be able to do what he needs to do,” Saban said. “And we’ll see as the week progresses, but I don’t have an update much more than that.”

Young hasn’t played since early in the second quarter against Arkansas. Jalen Milroe took over the rest of the way in that game and started in Alabama’s mistake-filled, 24-20 win over Texas A&M that came down to a goal-line stand.

Hooker, meanwhile, has put up Young-like numbers for one of the most prolific offenses in the nation. He has completed 70% of his passes for 1,432 yards and 10 touchdowns without throwing an interception and has passed Young in the midseason Heisman Trophy odds, according to FanDuel Sportsbook.

“Hooker has really done a nice job of executing their offense,” Saban said. “He’s one of the leading pass efficiency guys in the country as well as has the ability to extend plays and make plays with his feet.”

Young has passed for 1,202 yards, completing 67.2% with 14 touchdowns and three interceptions. The Tide offense hasn’t been the same without him, despite Milroe’s big-play flashes.

Alabama is just 68th nationally in pass offense while ranking behind only Air Force and Army in running the ball.

Hooker and Young both attended the Manning Academy over the summer.

“Awesome player. Very electric. Love to see him play,” Hooker said. “We spent some time at the Manning Academy and chopped it up a little bit. Really just had a good time, a genuine time of enjoying everyone that was there and just having general conversation.”

“I just think Jalen played with a lot of anxiety,” Saban said. “I don’t think he allowed himself to let his training sort of guide him and trust and believe in it so that he could have success in executing plays. You can’t turn the ball over and not execute plays like they’re designed.”

This will be Milroe’s first time inside Neyland Stadium, but he’s watched enough games on TV to know the environment in this traditional rivalry game will be “crazy.”