UPDATE: Two Suspects Caught, One Still on the Run in Car Theft, Fraudulent Use of Credit/Debit Card at ASU

UPDATE: Central Alabama CrimeStoppers says that thanks to an anonymous tip, two suspects in a stolen car/fraudulent use fo a credit/debit card have been found. CrimeStoppers is offering a cash reward to the tipster.

The third suspect is still on the run.

CrimeStoppers says both suspects wearing the blue sweatshirts in the original lookout are the ones who have been captured. Their names haven’t been released. 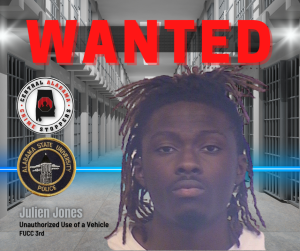 The person the red sweatsuit is still wanted. He has been identified as 18-year-old Julian Jones. Jones is wanted for fraudulent use of a credit card and unauthorized use of a vehicle, according to CrimeStoppers.

Alabama State University police are investigating a car theft and multiple fraudulent uses of a credit/debit card and need your help identifying people wanted for questioning.

Police say at about 2:30PM on Thursday, October 6, a beige 2007 Nissan Altima was stolen from the parking lot at the Dunn-Oliver Acadome.

Investigators say the victim received text messages of purchases that were made with the victim’s credit card.

The car was found on campus the next day and was returned to the victim.

If you have information about these persons of interest or about the case, call Central Alabama CrimeStoppers at (334) 215-STOP.