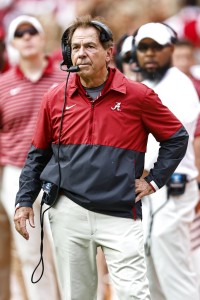 Alabama is still ranked No. 1 — but in penalties.

A now sixth-ranked Crimson Tide team that can hold its own with any college team in talent and has a seven-time national champion coach on the sideline hasn’t been able to get out of its own way at times.

Nick Saban’s team finally couldn’t overcome a rash of mistakes in a 52-49 loss to No. 3 Tennessee. The tally included a school-record 17 penalties, with the first coming on the opening kick, one missed field goal, a botched punt return that infuriated Saban and six delay of game or false start flags.

The No. 1 ranking had already disappeared even before that loss.

“Look, I think that our players all want to win, and regardless of how everybody feels, we feel worse,” Saban said Monday. “The players are out there competing. They’re playing hard. Maybe not always playing smart, maybe making too many errors that we need to fix. And as coaches, we need to help them fix them, teach them.”

It’s not the kind of big numbers the Tide are accustomed to posting. Alabama’s 66 penalties is the most among the 131 FBS teams. Alabama is 129th in penalties per game (9.43) and penalty yards per game (79.9).

The loss likely left no margin for error for Alabama to have a shot at its national championship goal and an urgency to clean up its act hosting No. 24 Mississippi State on Saturday night.

The mistakes were nothing new for this Alabama team, which also is tied for 101st in turnover margin.

—Alabama committed 15 penalties before escaping Texas with a 20-19 win on Will Reichard’s field goal in the final seconds.

—The Tide had 10 penalties for 101 yards against Arkansas but pulled away in the fourth quarter.

For comparison, Alabama’s latest national championship team averaged just six penalties for a loss of 48.1 yards per game in 2020.

Alabama had its ugliest offensive sequence in the first quarter. The Tide went backward 12 yards after starting on its own 14, with three incompletions and three penalties.

Saban indicated that some starting jobs are no longer secure, if they aren’t already lost.

“We can’t continue to tolerate guys that aren’t doing the things they need to do to be successful,” he said. “Nobody is entitled to a position.”

Saban said he noticed his players weren’t doing their normal exuberant chant when they came out of the locker room before the game.

“We probably had a lot of anxiety,” Tide linebacker Will Anderson Jr. said. “We probably didn’t have the same intensity that we had a couple of weeks ago. The intensity just wasn’t where it needed to be.”

Nor was the execution.