Hardy is accused in the death of 38 year old Samuel Taylor. Investigators found Taylor shot — and suffering from head injuries — earlier this month. 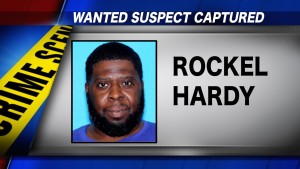 “Allegedly, he stuffed a guy in a trunk. And the guy crawled out and was able to get help. He later died though,” said District Attorney Michael Jackson.

“But it was a murder-robbery. That’s the basis of the capital murder charge.”

Granthum says Hardy was on probation for a 2012 murder — at the time of Taylor’s death.

A death he says may have never happened — if Hardy hadn’t been given such an easy sentence — for taking a life.

“There’s only one place they need to be. And that’s in the jail. That’s in prison,” said Granthum.

“That’s what we been asking for, stiff sentences on murder or manslaughter,” said Jackson.

“But that’s been a problem here. That’s been a big dispute, a philosophical dispute between my office and me as district attorney and some of these judges.

Hardy will be transported back to Dallas County this week to face the charges.