Election Day is two weeks away — and election officials in Dallas County are working to get everything ready for the big day.

Election officials are urging people to get out and exercise their right to vote — and make their voices heard on Election Day.

Nunn is the top election official in Dallas County. And he’s noticed that the activity level for the general election — is nowhere near where it was for the primary. 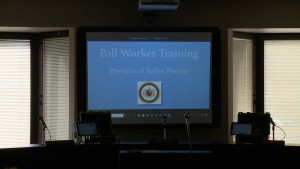 “People are not excited like they usually be excited with signs out, candidates, forums and all of that,” said Nunn.

And in Dallas County — most of the local races on the ballot — have candidates who are running unopposed.

Even so — Nunn says there are a dozen amendments on the ballot — that will impact Dallas County.

“We have two local amendments. So we really need to get people out to vote.”

Nunn says preparations for Election Day — are coming down to the wire.

The deadline to apply for an absentee ballot is Nov. 3rd.

“Ballots must be returned by the voter in person no later than 4:30, one day before election, which is November 7th. Now if you’re going to mail it, it must be post marked no later than November 7th,” said Bennett.

In-person absentee voting is available at the Dallas County Courthouse — Monday through Friday — from 8:30 am to 4:30 pm.