Tuberville: U.S. Has Too Many “Takers” Who Don’t Want to Work 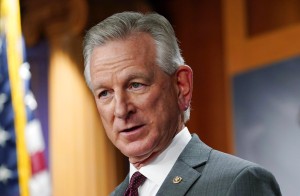 U.S. Sen. Tommy Tuberville (R-Alabama) said this week that the country has too many “takers” instead of workers and suggested that many in younger generations — including people in their 40s — don’t understand they need to work.

Tuberville, 68, made the remarks while discussing the national worker shortage during a speech to business groups in south Alabama.

“What’s happening in our country right now, we’re getting too many takers in our country,” Tuberville said Tuesday, according to Al.com. Later, he added, “They don’t want to go to work. We’ve got to get Generation X and these Millennials to understand that you have to tote your own load.”

A spokeswoman for Tuberville, responding to a question from The Associated Press on Wednesday, said the state’s junior senator misspoke and meant to say Generation Z, which is loosely defined as people born in the late 1990s and early 2000s, instead of Generation X, which includes people in their 50s. Millennials are generally defined as people born between 1981 and 1996. The oldest millennials are entering their 40s.

Tuberville made the remarks in Mobile on Tuesday. He was the featured speaker at a Forum Alabama breakfast presented by the Mobile Chamber and attended by local business leaders. He also spoke to news outlets during an appearance at Austal USA after touring the shipyard. The remarks about generational work ethic came two weeks after Tuberville was widely criticized for comments about race and crime.

“We’re getting too many takers in our country,” the former college football coach said. “They’d rather take a (government) check.”

While the federal government initially sent out trillions in pandemic relief funds, the COVID-19-related extended unemployment benefits and stimulus checks have ended. The last pandemic stimulus check was given out last year.

Businesses nationwide have struggled to fill positions amid a dire worker shortage, prompting some companies to raise wages or offer perks such as college tuition reimbursement to try to lure workers. Economists have pointed to complex reasons for the worker shortage in the wake of the pandemic, including a rise in early retirements, a shortage of affordable child care and other factors that have contributed to a workforce reshuffling.

Tuberville’s comments came two weeks after he drew widespread criticism for saying at an election rally that Democrats support reparations for the descendants of enslaved people because “they think the people that do the crime are owed that.”

In an interview with WALA-TV afterward, Tuberville maintained his comments were about crime, not race. “It had nothing to do with race. You know crime has no color,” he said.

Tuberville rejected calls to apologize. “I would apologize if I meant anything about race, but it wasn’t. Like I said, race has no color. Reparation would have no color,” Tuberville said.

Al.com reported that Tuberville deflected a question about the controversy.

“We don’t have enough people right now paying the price for a lot of the crimes that are being made,” he said. “They don’t need to be rewarded for it. They need to understand that we can’t run a country — it’s like a football team. If you’ve got people going in different directions breaking all the rules, you’re not going to win.”