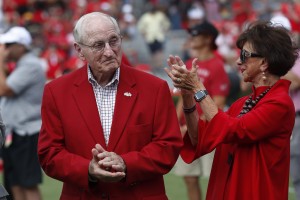 FILE -Former head Georgia football coach and athletic director Vince Dooley and his wife Barbara react during a ceremony to name the field at Sanford Stadium in his honor before an NCAA college football game against the Murray State Saturday, Sept. 7, 2019, in Athens, Ga.  (AP Photo/John Bazemore, File)

Longtime Georgia football coach Vince Dooley has died at the age of 90. The university says Dooley died peacefully at his Athens home on Friday in the presence of his wife and their four children.

No cause of death was given. Dooley was hospitalized earlier this month for what was described as a mild case of COVID-19.

Dooley guided Georgia through a quarter-century of success that included a national championship during the 1980 season. Dooley had a career record of 201-77-10 while coaching the Bulldogs from 1964 to 1988. He won six Southeastern Conference titles and remains the fourth-winningest coach in SEC history.

Dooley was hospitalized earlier this month for what was described as a mild case of COVID-19, but he pronounced himself fully recovered and ready to attend his regular book-signing session at the campus bookstore before an Oct. 15 game against Vanderbilt.

After retiring from coaching, Dooley continued as the school’s athletic director, a job he held from 1979 until 2004. He built a program that achieved success over a wide range of both men’s and women’s sports.

The field at Sanford Stadium was dedicated in his honor during the 2019 football season.

Dooley was born and raised in Mobile and played football at Auburn. He was quarterback for the Tigers from 1951 to 1953 and was an assistant coach from 1956 to 1963.