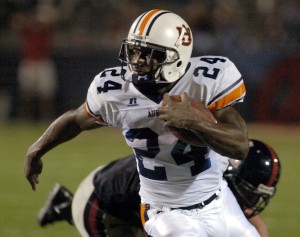 Auburn University has announced that Carnell “Cadillac” Williams will serve as interim head football coach for the rest of the season.

This move comes after Auburn announced that it had fired head coach Bryan Harsin late Monday morning after going 9-12 in less than two seasons.

Williams was an all-American running back at Auburn and has served as an assistant coach the previous four seasons.

As a player at Auburn, Williams helped lead Auburn to an undefeated season in 2004 while earning All-America honors that year. The 2005 NFL Rookie of the Year, Williams had a seven-year NFL career before entering the coaching ranks.

The Auburn graduate is in his fourth season as an assistant coach where he has served as the Tigers’ running backs coach.