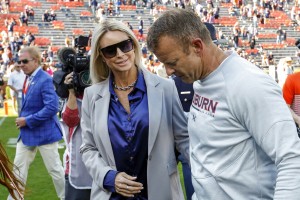 Kes Harsin, left, talks with her husband Auburn head coach Bryan Harsin as he walks off the field after an NCAA college football game against Arkansas, Saturday, Oct. 29, 2022, in Auburn, Ala. (AP Photo/Butch Dill)

Former Auburn head football coach Bryan Harsin has released a statement expressing disappointment, while praising the team for staying together “in the face of considerable challenges and outside noise.”

Auburn President Chris Roberts fired Harsin on Monday after a tenure in which he went 9-12, struggled against Power Five competition — going 4-11 — and faced a university probe into his program after his debut season.

“I am incredibly disappointed that I won’t get to lead the Auburn football program and these players into the future,” Harsin said in Tuesday’s statement. “I poured my heart and soul into this program and team.

“We stood together in the face of considerable challenges and outside noise. Through my entire time at Auburn we did things the right way, which is not always the easy way.”

Running backs coach Carnell “Cadillac” Williams will serve as interim coach for the Tigers, who visit Mississippi State on Saturday. New athletic director John Cohen, whose hiring away from Mississippi State was announced hours after Harsin’s firing, will be searching for a replacement coach.

Harsin said Auburn’s resources and fan base give the Tigers “the potential to be a championship program once again.”

“Like any coach with the benefit of hindsight, there are things that could have been done differently,” Harsin said. “I don’t pretend to be perfect but I am certain I will be better moving forward because of this experience.”

Former athletic director Allen Greene hired Harsin away from Boise State despite his lack of Southeastern Conference experience. Greene stepped down just before the start of football season.

Five players have recently announced intentions to enter the transfer portal, though reserve wide receiver Ze’Vian Capers was the first after Harsin’s firing. Auburn has lost its last four games.