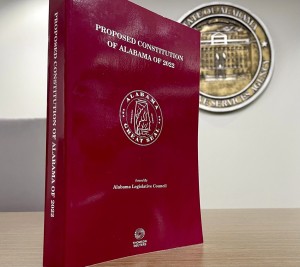 A copy of the proposed constitution of Alabama of 2022 is seen at the statehouse in Montgomery, Ala., on Tuesday, Nov. 1, 2022. Alabama voters on Nov. 8 will vote whether to ratify a recompiled Alabama Constitution that strips racist language and deleted repealed and redundant sections. The state’s governing document will remain the longest in the United States at over 300,000 words. (AP Photo/Kim Chandler)

The Alabama Constitution, approved in 1901, still has language regarding segregated schools, poll taxes and bans on interracial marriage.

But a change could be in store. Tuesday, Alabama voters will decide whether to remove Jim Crow-era language. It would also reorganize the governing document, which has been amended 978 times and tops over 400,000 words. The Public Affairs Research Council of Alabama says the size makes it the longest such document in the world.

Voters in 2020 authorized state officials and lawmakers to cut the racist language that lingers from the era of racial segregation. That work, finally completed, now goes back before voters to ratify the Alabama Constitution of 2022.

Proponents say the changes that will demonstrate Alabama is a different place today — and streamline the sprawling constitution to be more user-friendly.

“This is an effort to show, not only the rest of the country, but the world who we are today,” said state Rep. Merika Coleman (D-Birmingham), one of the lawmakers who led the bipartisan effort.

However, it does not make the policy changes that some reformers have sought — such as giving counties more home rule and removing tax earmarks, which dedicate taxes to a specific program or purpose.

To approve the measure, voters must vote ‘Yes’ on the question asking whether to ratify the “Constitution of Alabama of 2022. ” The ratification question will appear on the ballot after the list of candidates for office. There is also a separate amendment, Amendment 10, to authorize the code commissioner to renumber and nest the newest amendments within the Constitution.

The framers of the 1901 constitution were direct about their goal to maintain a government controlled by whites.

“The new constitution eliminates the ignorant negro vote, and places the control of our government where God Almighty intended it should be -– with the Anglo-Saxon race,” John Knox, president of the constitutional convention, said in a speech urging voters to ratify the document.

The Alabama Constitution has language allowing parents to opt for students to “attend schools provided for their own race” and sections about poll taxes, bans on interracial marriage and a convict labor system in which Black Alabamians, often arbitrarily arrested, were forced to work in mines and labor camps. The provisions were long ago invalidated by court rulings or later amendments, but the language remains in the state’s government document.

Alabama has seen efforts previously to invalidate racist language, but this goes further, said Othni Lathram, the director of the Legislative Services Agency.

For example, voters in 2000 approved an amendment repealing an unenforceable interracial marriage ban — although 40% of voters voted against the repeal — but the language about the ban remains in the Constitution and “you have to make it to the Amendment 667 to know that it’s been repealed,” he said.

“With the recompilation, it completely goes away,” he said.

The reorganization effort is designed to make the document more user-friendly, Lathram said. Repealed provisions will be removed and the nearly 1,000 amendments will be incorporated into the document. Amendments related to local areas will be organized by county so they can be more easily found.

Tom Spencer, a senior research associate at Public Affairs Research Council of Alabama, said the proposal will strip remaining racist language. However, it will continue the current structure that centralizes power in the Legislature, and will not change the state’s tax structure.

The Alabama Constitution of 1901 is currently 420,000 words. The new Constitution would shrink slightly to 373,274 words, but that is three times more words than the next-longest state constitution – Texas, according to an analysis from the PARCA.

“Power will still be concentrated in the Legislature and local matters, like whether counties can regulate golf carts on public roads, will continue to clutter the state constitution … And it will still be the world’s longest constitution. Even with the organizational fixes, the document is a confusing mess,” Spencer wrote.

The state committee that worked on the recompilation and the lawmakers who approved it only had a narrow charge to delete racist or repeated language and to reorganize, according to Coleman. However, she is hopeful the ratification will be approved.