Hundreds of people in west Dallas County will soon have a cleaner, safer source of water in their homes.

A $3.8 million dollar project is taking county water into the Bogue Chitto community of Dallas County.

People there currently get water for their homes from water wells.

“Some people would get sick when you drink the water. But we later found after we had the water tested that bacteria is in the water,” said Shelly McGee.

“So at that point, as we learned that, we just found alternate measures to kind of minimize the use of the water as much as possible,” said Francious Thomas. 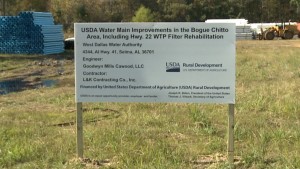 And that’s when the work began to get the community connected to the county water system.

“And so, it’s going to impact the health and the lives of a lot of rural residents.”

The project will allow the West Dallas Water Authority to expand it’s water service into the Bogue Chitto community.

A ground breaking ceremony for the project was held Monday morning.

“You have to have clean water in order to survive and have a good life.”

“They brought the pipes in and placed them on our property over there. And they’re ready to start digging to lay the pipes,” said McGee.

County officials say the project is expected to be complete in about three months.