Auburn Shuts Down Western Kentucky in Second Half, Wins 41-17 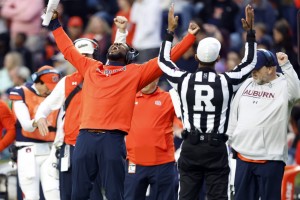 After Western Kentucky generated 290 yards and 17 points in the first half, Auburn’s defense held the pass-happy Hilltoppers to 105 yards and allowed zero points after halftime.

Bigsby and Hunter both scored long rushing touchdowns, and D.J. James returned an interception 25 yards to cap 24 unanswered points for the Tigers in the second half.

Western Kentucky (7-5, 5-2 Conference USA), which has won four games against SEC opponents since 2012, was unable to carry a strong second quarter of offense into the second half. Hilltoppers quarterback Austin Reed had 290 passing yards, two touchdowns and two interceptions in the loss.

The Tigers struggled in second halves earlier this season under Bryan Harsin, but they have now played well after halftime in all three games under Williams. While Auburn has had little to play for recently — except for an outside shot at making a bowl game — the team’s energy has been noticeably different since the coaching change.

Auburn visits No. 8 Alabama for the Iron Bowl on Saturday. Kickoff is at 2:30PM CST on CBS 8.