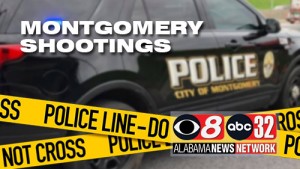 Montgomery police are investigating two shootings that left three people with gunshot wounds.
Montgomery Police Dept. Capt. Jarrett Williams told Alabama News Network that officers were called to the 2100 block of East South Boulevard at about 3:41PM Friday.  That’s the area of Baptist Medical Center South. That’s where they found two men with gunshot wounds.
Williams says they had both been shot in the area of April Street and Ridgecrest Street. Their injuries aren’t believed to be life-threatening.
He says the second shooting happened early this morning. Officers were called to the 4900 block of Hatton Avenue at about 4:41AM. They found a man with a gunshot wound, who was taken to the hospital for treatment. His injuries are also not believed to be life-threatening.
Williams says there have been no arrests in either shooting, and there is no other information available about either shooting.
Categories: Crime, Montgomery Metro, News
Tags: Man shot, men shot, Montgomery Police Department, montgomery shootings