One of the oldest family-owned businesses in Selma is closing — after doing business in the city for more than a century.

Swift Drug Company in downtown Selma — has been serving people in the community for a 106 years. And in that time three generations of the Swift family have owned and operated the business.

Seventy-two year old Buddy Swift — has been running the business — since 1972.

“And it’s been a, been a good run. And I think we’ve helped a lot of people along the way. That’s the thing I’m most proud of,” said Swift. 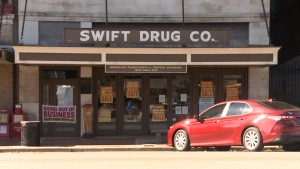 “For a business like Swift Drugs to close down in Selma, it is a loss. It will truly be felt throughout the entire community,” said Doris Butler.

Swift decided to close the business after doctors discovered a malignant tumor in his pancreas.

“And I will have surgery next Friday. and I’m going to be out at least two months. And that’s what made me decide that I need to close down at this point and time,” said Swift.

People in the community stopped by the store Monday morning — to comfort and encourage Swift.
And to take advantage — of some of the deep discounts — now available at the store.

“I just came to wish Buddy well. And look around cause they do have some great bargains right now,” said Butler.

“And they’re sad too. Because they’re gon’ miss us. And we’re gon’ certainly miss them.”

Swift Drugs has been an integral part — of the Selma community — over its history.

The store will be open for about three more weeks.

The business will close it’s doors for good — on December 23rd.