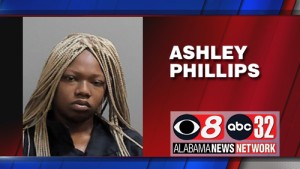 Montgomery fire investigators say a woman has been charged with setting a string of fires at a Montgomery apartment building.

Investigators say Ashley Phillips is charged with first-degree arson and is being held on $60,000 bond at the Montgomery County jail.

Firefighters responded to a fire at a six-unit apartment building at 1900 Gibbs Circle at 8:20 this morning. There was minor damage.

Investigators say there have been several fires reported in that building recently as well as at Phillips’ mother’s home nearby.

They say Phillips admitted to setting the fires, saying she wanted to keep warm after having her power disconnected.