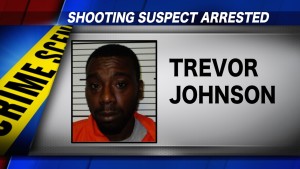 A shooting in Wilcox County leaves one Camden man behind bars — and another one is in critical condition in a Birmingham hospital.

He’s accused of shooting 23 year old Tyrese Dorch — after a fight between the two men.

Evans says the shooting happened at around 11:30 Sunday morning — near the Meadowbrook community — east of Camden.