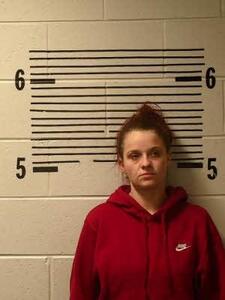 Millbrook police say a Deatsville woman led them on a chase following a theft at Walmart.

Police say on Tuesday, they responded to a theft in progress at Walmart. Officers were told that the alleged thief was driving away.

Officers say they also learned that there was possibly a one-year-old child in the car. Based on the suspect’s reckless driving, traffic conditions and the possibility of a child being inside, they stopped pursuing the car.

A short time later, police say someone called 911 to say the driver turned onto Violet Lane, which is a dead-end road. Police found the car, which had been abandoned near a vacant home.

Police say they were in contact with a family member of the suspect who confirmed that the suspect had her child with her and was threatening to harm herself. After a search, they found her and her child hiding behind a home.

Police have identified her as 25-year-old Tiffany Smith. She has been arrested and charged with attempting to elude, domestic  violence 3rd degree (Reckless Endangerment), and 11 counts of reckless endangerment. Smith is being held in the Elmore County Jail on a $13,000 bond. Police say additional charges for theft may be pending from Walmart, once warrants are obtained.

“There have been recent discussions with regard to proposed legislation in our state, which would make fleeing from law enforcement a felony. I wholeheartedly support that,” Millbrook Police Chief P.K. Johnson said.

“I am sure other law enforcement officials will join me in encouraging our state legislators to pass that legislation. Vehicle pursuits are inherently dangerous and anything that we can do to discourage people from fleeing from law enforcement, we certainly need to take a hard look at.”