The superintendent of Selma City Schools stepped out of Central Office — and into a classroom Monday. He says its a way to stay engaged with students — and teachers.

Engaging with teachers and students — is part of a new strategy to rethink — reignite — redesign — and transform the Selma City school district.

It’s rare to have the superintendent of a school district in a classroom teaching students. 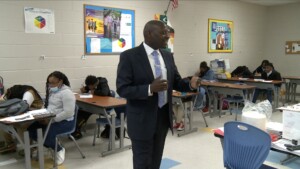 But Selma City Schools Superintendent Dr. Zickeyous Byrd — did exactly that Monday afternoon. He taught a lesson at Selma High School — in a Career Preparedness class.

“I was even taking notes being a part of the class. Because I became a student at that point. And what the superintendent is doing is a great example,” said Lee.

“It is my goal to model a lesson in each school at least once a month,” said Byrd.

It’s part of his strategy to transform the entire school district. And put the main focus of education back where it belongs. On teachers and students.

“And so as leaders, we have to make sure that we are providing the support that our teachers need. Leaders can’t lead from behind a desk.”

Byrd taught students a lesson on taxes. What they are. How they’re paid. And what they’re used for.

“And that’s good for the kids as freshmen. Because they need it you know. In the next year or so they’ll be working for some type of job or something. And they’re going to want to know where their money’s going.”

Byrd also taught students — what it means to be a responsible adult.

“In life you have to make adjustments. And so, it’s important for our students to be able to recognize that now.”

The district has ten schools — and serves about 2500 students.