WATCH: Attorney General: “No Moratorium” on Executions in Alabama 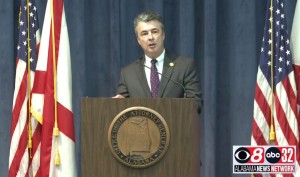 Alabama Attorney General Steve Marshall held a news conference to say that there is “no moratorium” on executions in Alabama, despite Gov. Kay Ivey’s call for a review of the state’s protocol.

Marshall said he has no problem with a review, but it needs to be reasonable and timely.

Ivey asked Marshall to withdraw the state’s requests to set execution dates for Alan Eugene Miller and James Edward Barber. Those are the only two death row inmates with motions pending before the Alabama Supreme Court.

Ivey said at the time that she is working with the Alabama Department of Corrections to ensure the state can successfully deliver lethal injections in death penalty cases.

“For the sake of the victims and their families, we’ve got to get this right. I don’t buy for a second the narrative being pushed by activists that these issues are the fault of the folks at Corrections or anyone in law enforcement, for that matter. I believe that legal tactics and criminals hijacking the system are at play here,” she said.

The executions haven’t occurred due to issues with establishing an IV line to administer the lethal drugs in the time allowed to perform them.

Marshall says that justice delayed is justice denied and that victims’ families have waited far too long to have arguments over whether a small IV needle violates the constitution.