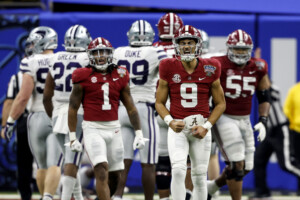 Alabama quarterback Bryce Young passed for 321 yards and five touchdowns in a game that other top NFL prospects might have skipped, and No. 5 Alabama responded to an early two-score deficit with 35 straight points to defeat AP 11th-ranked Kansas State 45-20 in the Sugar Bowl on Saturday.

While a number of pro-bound college stars sat out bowl games that were not part of the College Football Playoff, the Crimson Tide and Wildcats had their best prospects on the field and making a number of memorable plays — from Young’s pivotal passes, to Kansas State running back Deuce Vaughn’s 88-yard touchdown run to interceptions by Alabama’s Jordan Battle and Brian Branch.

Young was substituted out during a series in the fourth quarter, raising his right hand to Alabama fans who loudly rose to their feet as the former Heisman Trophy winner trotted to the sideline.

Kansas State (10-4) entered its first Sugar Bowl on a four-game winning streak and was riding high after knocking off No. 3 TCU — a CFP team — in the Big 12 title game.

Alabama was on the brink of punting a third time when Young, on third and 10, stepped up in a collapsing pocket and flicked a short pass to Gibbs, who was cutting across the middle and turned up field for a 60-yard gain. Young stepped up similarly to avoid pressure on his touchdown pass to Bond shortly after.

Young threw over the top to Burton for 47 yards to setup his 1-yard scoring pass Latu that put Alabama in front for good.

Late in the first half, Kansas State drove to the Alabama 2 — converting two fourth-downs along the way — only to fail on fourth-and-goal when Howard threw out of the reach of tight end Ben Sinnott, who was breaking open after Will Anderson fell while trying to cover him.

Young needed just 51 seconds to produce another touchdown, completing passes of 12, 28 and 22 yards before hitting Burton from 12 yards out to make it 21-10 at halftime.

Kansas State paid for taking another risk when its onside kick to open the second half was recovered by Alabama, which scored shortly after on Young’s 32-yard strike to Ja’Corey Brooks in the corner of the end zone.

After saying all week that they were treating the Sugar Bowl like a championship game, the Crimson Tide backed it up. The narrative coming in was that Alabama doesn’t get up for low-stakes bowl games, having lost by two touchdowns each in its previous two Sugar Bowl appearances that were not part of the BCS or CFP. Alabama has now won 10 Sugar Bowls in 17 appearances.

Up next for Alabama, the Crimson Tide will host Middle Tennessee on Sept. 2 to begin its 2023 season.