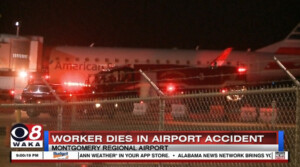 Alabama News Network has new information about the accident at the Montgomery Regional Airport that left a worker dead.

The National Transportation Safety Board said in a statement that a member of ground support personnel was “ingested into the engine” of an aircraft while it was parked at the gate with the parking brake set. The NTSB said Sunday that it has opened an investigation into the incident.

In a statement, airport officials say that at 3PM Saturday, an American Airlines/Piedmont Airlines ground crew member was killed on a ramp.

“We are saddened to hear about the tragic loss of a team member of the AA/Piedmont Airlines, said Wade A. Davis, Executive Director of MGM. “Our thoughts and prayers are with the family during this difficult time.”

American Airlines said in a statement it was “devastated by the accident involving a team member,” adding, “Our thoughts and prayers are with the family and our local team members. We are focused on ensuring that all involved have the support they need during this difficult time.”

The airport suspended operations for a time on Saturday after the accident happened.

The victim’s name hasn’t been released. The FAA will also investigate.

The flight, operated by regional carrier Envoy Air, was scheduled to depart Montgomery for Dallas-Fort Worth Saturday afternoon, according to the flight tracking site FlightAware.com.