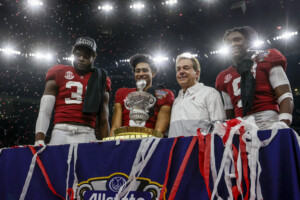 Alabama quarterback Bryce Young and linebacker Will Anderson, Jr. are heading to the NFL, where both could contend for the top draft spot. Tailback Jahmyr Gibbs has also declared for the draft.

Young, the 2021 Heisman Trophy winner, and the two-time unanimous All-American Anderson on Monday announced their decisions to skip their senior seasons, two days after leading Alabama to a 45-20 victory over Kansas State in the Sugar Bowl.

They endeared themselves to Crimson Tide faithful even more by not joining the ranks of bowl opt-outs among NFL prospects. Young passed for 321 yards and five touchdowns in New Orleans.

He got a loud ovation from Alabama fans when he was substituted out for backup Jalen Milroe in the fourth quarter, and later a salute from Kansas State coach Chris Klieman.

Anderson is one of the top pass rushers in Alabama history and is even more acclaimed than Young. He is only the second two-time Nagurski Trophy wnner and he also won both the Lombardi Award and Lott IMPACT Trophy as a junior.

He finished his three-year career with 34 1/2 sacks and 62 tackles for loss, behind only Derrick Thomas in school history.

Gibbs, a Georgia Tech transfer, ran for 926 yards and seven touchdowns and gained 444 yards on 44 catches.