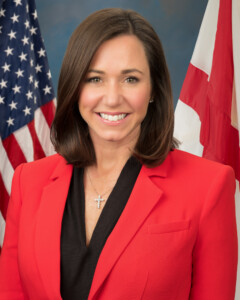 Republican Katie Britt has now taken the oath of office as Alabama’s first female to be elected to the U.S. Senate.

Britt took the oath on the Senate floor shortly after the first session of the 118th Congress convened at 11AM.

Her office reports that nearly 500 Alabamians traveled to Washington to celebrate in person, and some of them got a tour of Sen. Britt’s temporary office space in the Dirksen Senate Office Building.

“It was a humbling moment to take the oath of office today on the Senate floor,” Sen. Britt said in a statement. “I am truly grateful to the people of Alabama for their trust, confidence, and prayers. Now, it’s time to get to work to fight for our people, our liberties, and our values.

“It will be my mission every day in the Senate to be a leader who looks to identify and implement tangible, meaningful solutions to the serious challenges and opportunities facing both Alabama and America, so hardworking families can thrive in strong communities.

“Looking up to the gallery from the Senate floor today and seeing my two children smiling down at me reminded me what this is all about – preserving the American Dream for generations to come. As this new year gets underway, my family and I would like to wish everyone a healthy, safe, and prosperous 2023. I have no doubt that our brightest days are ahead. May God continue to bless our great state and nation.”

Britt takes the seat of the retiring U.S. Sen. Richard Shelby, who was first elected in 1986. Shelby thanked the state of Alabama for its support in his final post on Twitter before leaving office for retirement.