A Dallas County woman loses everything except what really matters when her mobile home burns down on New Year’s Day.

Then woke up later because she was feeling sick. So sick in fact — that her fiance — ended up taking her to the emergency room at Vaughan Regional Medical Center.

Martin was treated at the hospital. Then went back home.

“When we got to the hill cause you know it’s a hill right there, we seen fire,” said Martin. 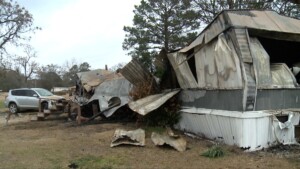 “But I was just praying and hoping that it wasn’t our mobile home.”

But it was. And now all that’s left of the place she called home — is a burnt out shell. And she now finds herself homeless to start the New Year.

“Everything was engulfed. I know nothing was salvageable,” said Martin.

But despite of her current circumstance Martin says she’s grateful. Because if she had not gotten sick — she and her fiance, Michael Johnson, may have been sleeping inside the trailer when it went up in flames.

“Just to be here and can talk about it now, is just a blessing. You know what I mean? We still got each other. Even though we lost a lot, we’re still here,” said Johnson.

“You get only one life. You can get material things back. But your life when it’s gone, it’s gone,” said Martin.

Martin syas she wants to put another trailer on the site. And anyone who wants the scrap metal from the trailer — is welcome to come haul it away.

In addition, a gofundme page to help Martin recover from the fire has been set up under the title — “Recently, my mother has lost home due to fire.”