A Wilcox County commissioner has been arrested and charged with second degree forgery. And now he’s defending himself — in a court of law.

Commissioner Quarre Calhoun is accused in the case. And a preliminary hearing is set for next week. 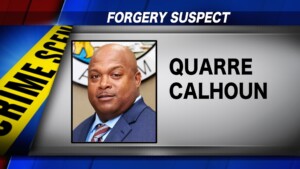 District Attorney Michael Jackson says if the judge hearing the case against Calhoun — finds probable cause — the case will then move forward through the court system.

Jackson says the preliminary hearing is set to be heard by a judge who’s being brought in from another county.

“Hale County District Judge Tim Evans is the one that will hear the case.”

Jackson says — if the judge finds probable cause in the case — it will then proceed — to an upcoming grand jury.

And if the grand jury finds probable cause — Calhoun will be indicted for the crime — and the case will then move on to circuit court.