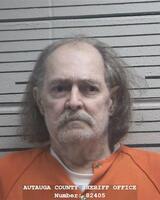 A man has been arrested on an arson charge in Autauga County.

Interim Autauga County Sheriff David Hill says Alan Wayne Bone is charged with first-degree arson and is being held on a $60,000 bond.

Court records say Bone intentionally damaged a mobile home by starting or maintaining a fire while a woman was inside at the time.

Hill said it happened Thursday around 6:30PM in the 1600 block of Martin Drive, which is a Deatsville address. Hill said he did not know the relationship of the suspect and victim, but court records list their address as being the same.