UPDATE: Buffalo Bills’ Damar Hamlin Breathing on His Own, Joins Team via Video 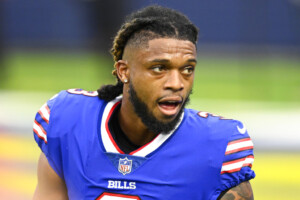 Buffalo Bills safety Damar Hamlin is breathing on his own and able to talk after having his breathing tube removed, his agent said Friday — the latest step in his remarkable recovery in the four days since going into cardiac arrest and being resuscitated on the field during a game against the Cincinnati Bengals.

Hamlin even joined the Bills’ team meeting on Friday morning via videoconference. He used mostly hand gestures — “some staple things that (the players) know him for,” Bills coach Sean McDermott said — and told them with his voice at the end “love you boys.”

“I probably won’t be able to do it justice,” McDermott told reporters later Friday morning, “but just to see Damar, No. 1, through my own eyes, it was something I was hoping to see and kind of something I needed to see … and to see the players’ reaction, they stood up right away and started clapping for him and yelling some things.”

McDermott said he kept it a secret from the team before announcing he had “a treat in store” for them — putting Hamlin on the big screen in the meeting room.

The 24-year-old Hamlin was listed Thursday in critical condition in the intensive care unit of the University of Cincinnati Medical Center, and there was no update as of Friday. Before the breating tube was removed, Hamlin could communicate by writing and grip people’s hands.

In a Friday statement, the team said Hamlin’s “neurologic function remains intact and he has been able to talk to his family and care team.” Agent Ira Turner was unable to provide any other details in a text to The Associated Press. The development was first reported by The Athletic.

Hamlin’s recovery continues to trend in a positive direction after his heart stopped while making what appeared to be a routine tackle in the first quarter of a game against the Bengals on Monday night. The second-year player spent his first two days in the hospital under sedation to allow his body to recover, and on a ventilator to assist his breathing.

The Bills were uplifted by the encouraging medical reports as they returned to practice Thursday in preparation to play a home game against the New England Patriots on Sunday.

The NFL announced plans to show support for Hamlin during all Week 18 games, including a pregame moment of support, painting Hamlin’s No. 3 on the 30-yard line and pregame shirts with “Love for Damar 3.” The Bills will also wear “3” jersey patches.

The sight of Hamlin collapsing, which was broadcast to a North American TV audience on ESPN’s “Monday Night Football,” has led to an outpouring of support from fans and players from across the league. Fans, team owners and players — including Tom Brady and Russell Wilson — have made donations to Hamlin’s Chasing M’s Foundation, which had raised more than $7.8 million by Friday morning.