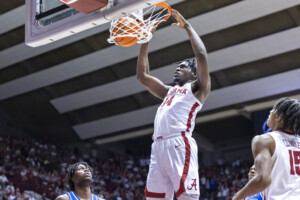 Alabama center Charles Bediako (14) dunks the ball during the first half of an NCAA college basketball game against Kentucky, Saturday, Jan. 7, 2023, in Tuscaloosa, Ala. (AP Photo/Vasha Hunt)

Alabama’s star freshman Brandon Miller had 19 points and seven rebounds in front of NBA scouts and a capacity crowd for the No. 7 Crimson Tide, which dominated Kentucky 78-52 on Saturday.

Alabama (13-2, 3-0 Southeastern Conference) had its largest margin of victory over Kentucky in the series’ 150-game history. Meanwhile, the Wildcats (10-5, 1-2) matched their lowest-scoring SEC game under coach John Calipari.

“I can’t say enough about our guys — how hard they played on defense, how locked in to the scouting report they were,” Alabama coach Nate Oats said.

Alabama football coach Nick Saban was in attendance and saw a defensive performance that would make him proud, as the Crimson Tide held Kentucky to just 29% shooting. Jahvon Quinerly had one of his best games since returning from an ACL injury in November, scoring 12 points, while guard Mark Sears locked in with 13 second-half points and finished with 16 points, six rebounds, four assists and six steals.

“It’s definitely one of his best defensive performances,” Miller said of Sears. “I feel like he’s even better than what he did tonight. And I feel like it’s just up from here on out.”

Alabama pushed the lead as high as 31 points, and Oats liked the way his team was able to maintain that energy all the way to the end.

“I was proud of our guys for not letting their foot off the gas,” Oats said.

The Wildcats struggled to get into any sort of rhythm offensively. Sahvir Wheeler and Antonio Reeves accounted for 20 of Kentucky’s 24 first-half points. Reeves had 20 points overall and Wheeler 15.

Calipari said his team has to start playing better on the road after dropping its first two SEC away games.

“We are better than we played, and I told them after that most of the time you’re not as good as you think and as bad as you think,” Calipari said. “Let’s just hope we’re not as bad as we looked today.”

The Crimson Tide continues to look like one of the best teams in the SEC and the country.

Alabama will visit No. 13 Arkansas on Wednesday night.