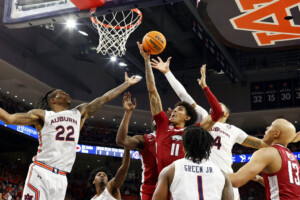 Arkansas forward Jalen Graham (11) tries to put up a shot as Auburn guard Allen Flanigan (22) and Auburn forward Johni Broome (4) try and block during the first half of an NCAA college basketball game Saturday, Jan. 7, 2023, in Auburn, Ala. (AP Photo/Butch Dill)

Wendell Green Jr. scored 19 points and Allen Flanigan matched his season high with 18 to lead No. 22 Auburn to a 72-59 victory over No. 13 Arkansas on Saturday night in the Tigers’ first game against a ranked opponent.

The Tigers (12-3, 2-1 Southeastern Conference) took a double-digit lead into halftime and didn’t come close to becoming another comeback victim of the Razorbacks (12-3, 1-2).

Green had five assists, while Flanigan pulled down eight rebounds. Johni Broome finished with 10 points and 10 rebounds for Auburn in his third straight double-double.

Anthony Black led Arkansas with 23 points after the freshman totaled 13 in his first two SEC games. He matched that from the free throw line alone, making 13 of 16. Ricky Council IV had 14 points.

Black scored 11 straight Arkansas points with Auburn threatening to run away with it in the second half. The Razorbacks twice cut the deficit to nine points in the final four minutes, but couldn’t come closer.

Green made 3 of 4 free throws in the final minute and Flanigan hit both of his attempts from the line to avoid any kind of jeopardy.

Auburn took a 36-25 lead into halftime after Arkansas failed to make a basket over the final five minutes.

Green scored seven points in the first 90 seconds, including a pair of 3-pointers and a free throw after drawing a foul on the first. That matched his point total in a loss to Georgia when he was 2-of-12 shooting.

Auburn never trailed in the game and has snapped a three-game losing streak to the Razorbacks and rebounded strongly from a 76-64 loss at Georgia that put the Tigers in jeopardy of falling from the rankings for the first time.