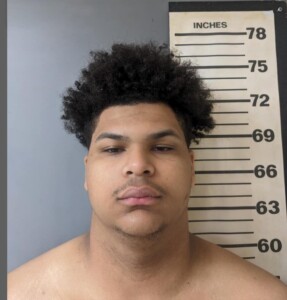 Andalusia police have charged an 18-year-old with first-degree robbery in a case that involved gunfire.
Police say they responded to two calls Friday night that turned out to be connected.
First, police say Andalusia Health reported a person had come in with a non-life threatening gunshot wound shortly before 8PM Friday. Police say it didn’t take long to connect that person to an attempted robbery that had happened on 9th Street.
Capt. Brett Holmes said when police responded to the attempted robbery, the victim said he was sitting outside in his vehicle at his home when he was approached by a person wearing a mask and carrying a gun, who tried to rob him. Police say the victim took out his own gun and fired several shots at the would-be robber.
Police say both the shooter and witnesses identified Diandre Nicholas Sheridan of Andalusia as the person who attempted the robbery. He is being held in the Covington County Jail on a $150,000 bond.
Categories: Crime, News, South Alabama
Tags: andalusia alabama, Andalusia Police Department, attempted robbery