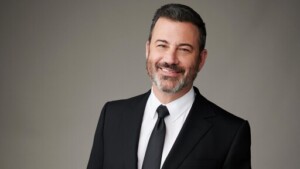 We’re super thrilled to have Jimmy score his hat trick on this global stage. We know he will be funny and ready for anything!” said Weiss and Kirshner.

“Jimmy is the perfect host to help us recognize the incredible artists and films of our 95th Oscars. His love of movies, live TV expertise and ability to connect with our global audiences will create an unforgettable experience for our millions of viewers worldwide,” said Academy CEO Bill Kramer and Academy President Janet Yang. “With Kimmel, Weiss and Kirshner’s fresh perspective and masterful guidance, the Oscars will celebrate its rich 95-year history, the collaborative nature of moviemaking, and our diverse, dynamic and deeply creative community of filmmakers.”

“Having Jimmy Kimmel return to host ‘The Oscars’ is a dream come true. As we see every night on his own show, Jimmy can handle anything with both heart and humor; and we know that he will deliver the laughs and celebratory moments that define the Oscars,” said Craig Erwich, president, ABC Entertainment, Hulu & Disney Branded Television Streaming Originals. “We love being the home of Hollywood’s biggest night and can’t wait to toast the success of this year’s cinema and storytelling.”

“Being invited to host the Oscars for a third time is either a great honor or a trap. Either way, I am grateful to the Academy for asking me so quickly after everyone good said ‘no,’” said Kimmel.

Kimmel serves as host and executive producer of ABC’s “Jimmy Kimmel Live!” and recently signed a three-year contract extension, making him one of the longest-running talk show hosts in American television history.

The 95th Oscars will be held on Sunday, March 12, 2023, at the Dolby Theatre at Ovation Hollywood and will be televised live on ABC and in more than 200 territories worldwide.

The Academy of Motion Picture Arts and Sciences is a global community of more than 10,000 of the most accomplished artists, filmmakers and executives working in film. In addition to celebrating and recognizing excellence in filmmaking through the Oscars, the Academy supports a wide range of initiatives to promote the art and science of the movies, including public programming, educational outreach and the Academy Museum of Motion Pictures.

NEW EPISODE 1/12: The Parent Test - “You Have to Make a Superhuman”

Grammy® and Academy Award® Winner H.E.R. To Star As Belle in ABC’s Upcoming ‘Beauty and the Beast: A 30th Celebration’ Special