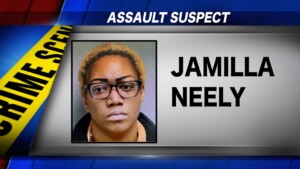 The woman accused of attacking her cousin with a razor blade — turned herself in to authorities Tuesday morning.

Thirty-seven year old Jamilla Neely of Selma — was then arrested and charged with assault-first degree.

A warrant was issued for Neely’s arrest Monday — after her cousin told authorities — that Neely came to her house Sunday — and slashed her face with a razor when she opened the door.