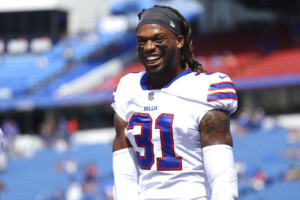 Bills safety Damar Hamlin was released from a Buffalo hospital on Wednesday, more than a week after he went into cardiac arrest and had to be resuscitated during a game at Cincinnati, after his doctors said they completed a series of tests.

A news release from the Bills quoted Dr. Jamie Nadler as saying: “We have completed a series of tests and evaluation and in consultation with the team physicians, we are confident that Damar can be safely discharged.” Nadler said Hamlin will continue his rehabilitation with the Bills.

Hamlin is going home after spending two days undergoing tests at Buffalo General Medical Center. He was transferred to Buffalo on Monday after spending last week at the University of Cincinnati Medical Center, where the 24-year-old from the Pittsburgh area experienced what doctors called “a remarkable recovery.”

The news came as the Bills returned to practice to prepare to host their division rival Miami Dolphins in a wild-card playoff game on Sunday.

Coach Sean McDermott said it would be up to Hamlin whether he would visit the team.

“His health is first and foremost on our mind a far as his situation goes,” McDermott told reporters. “We’ll welcome him back as he feels ready.”

Hamlin collapsed on the field after being struck in the chest by Bengals receiver Tee Higgins while making what appeared to be a routine tackle during the first quarter of Buffalo’s since-canceled game at Cincinnati on Jan. 2.

He spent the first two days in hospital under sedation. He was awakened and able to grip people’s hands at his bedside, and eventually taken off a ventilator and able to address his teammates on Friday.

His doctors said Hamlin’s progress in recovering from cardiac arrest, considered a life-threatening event, has been normal to accelerated, and that he was able to cheer on the Bills from his hospital bed during their win over the New England Patriots last weekend.

He has been tweeting his gratitude to fans and medical staff in recent days. “Keep me in y’all prayers please!” he wrote Tuesday.

Doctors have said it is premature to comment on the potential cause of Hamlin’s cardiac arrest. The news release did not provide any information on what the tests revealed.

The Bills wore No. 3 Hamlin patches on their jerseys Sunday and honored their teammate by raising three fingers in the closing minutes. It was part of a league-wide outpouring of support for the second-year player out of Pitt, whose collapse during the Monday night game and the frightening aftermath was seen by millions of television viewers. With an ambulance standing by on the field, medical personnel frantically worked on Hamlin for several minutes as anguished teammates looked on, some of them in tears.

In the days that followed, $8.6 million in GoFundMe donations poured into Hamlin’s toy drive fundraiser, which will be used to support young people through education and sports.

He also will use proceeds from the sale of new T-shirts, emblazoned with “Did We Win?” along with his hands in the shape of a heart, to raise money for the trauma center in Cincinnati that initially treated him.