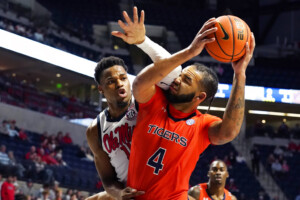 Auburn forward Johni Broome (4) is elbowed on the nose by Mississippi guard Matthew Murrell (11) during the first half of an NCAA college basketball game in Oxford, Miss., Tuesday, Jan. 10, 2023. (AP Photo/Rogelio V. Solis)

Wendell Green Jr. scored 23 points, including 18 in the second half, and No. 21 Auburn dominated after halftime to beat Mississippi 82-73 on Tuesday night.

“We played well early and we are showing positives,” Ole Miss coach Kermit Davis said. “We just couldn’t convert early in the second half and you can’t count on holding Auburn down. There’s nothing like winning and there’s a lot of basketball to go and good things can still happen for us.”

Road wins are crucial if the Tigers hope to compete for a regular-season SEC championship and improve their seeding prospects for the NCAA Tournament. Auburn split two road games while also beating then-No. 13 Arkansas during a six-day stretch.

“It’s been a tough stretch, a tough turnaround,” Pearl said. “We will get home sometime early in the morning, go to class and have a light practice. We can use the extra day. The good news is we will be back in our place on Saturday.”

Auburn is one of five ranked SEC teams and should extend a 29-week stretch in the AP Top 25.