No. 4 Alabama Uses Late Runs to Put Away No. 15 Arkansas 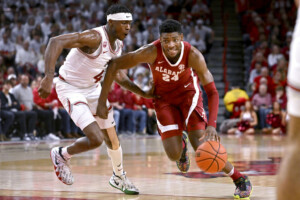 Alabama forward Brandon Miller (24) tries to get past Arkansas guard Davonte Davis (4) during the first half of an NCAA college basketball game Wednesday, Jan. 11, 2023, in Fayetteville, Ark. (AP Photo/Michael Woods)

No. 4 Alabama went on a 16-4 run midway through the second half and an 11-0 run late to beat No. 15 Arkansas, 84-69, on Wednesday and stay unbeaten in the Southeastern Conference.

The Crimson Tide (14-2, 4-0 SEC) made 5 of 6 goals during the stretch in the middle of the second half while Arkansas was just 1 of 7 during Alabama’s run as a tie game turned into a 12-point Alabama lead.

Arkansas (12-4, 1-3) pulled within two points with 4:30 left after making five straight shots from the floor to close the gap. Alabama followed with 3-pointers on each of its next three possessions, including two by Brandon Miller, to sap the home crowd and rebuild the lead to double digits.

“We’ve been good in tough games,” Alabama coach Nate Oats said. “I thought the loss to UConn really showed our guys if you’re not tough, you’re not going to be able to win these big games.”

Alabama struggled during the period when its best player did, too. Miller, who entered as the top scorer in the SEC averaging 18.1 points per game, was without a shot attempt through the first half and the Crimson Tide were tied at the break.

Mark Sears did most of the Crimson Tide’s offensive damage early and plenty late as he scored a game-high 26 points. Noah Clowney added 15 and Miller finished with 14 points.

“Offensively, we needed someone to score the ball,” Oats said. “Sears can make shots. We needed him to shoot it. He got downhill and scored the ball, both.”

Miller and Clowney, both freshmen, made all three of Alabama’s 3-pointers in the final run that built the Crimson Tide’s lead back to double digits.

Arkansas was again without its top freshman as guard Nick Smith Jr. remained out with a knee injury. The Razorbacks are just 2-3 since he left during Arkansas’ win over Bradley on Dec. 17.

Alabama looked the part of a No. 1-seed when the NCAA Tournament rolls around, showing a clear edge for the bulk of the game and using runs when things were close.