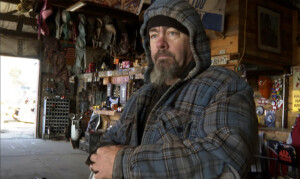 David Hollon stands inside his garage in Autauga County on Saturday, Jan. 14, 2023. The Alabama engine mechanic took refuge in a shipping container near the back of his garage as a tornado decimated his shop and killed two of his neighbors. (AP Photo/Sharon Johnson)

An engine mechanic in Autauga County took refuge in a shipping container as Thursday’s tornado destroyed his shop and killed two of his neighbors.

The harrowing stories of David Hollon and other survivors are emerging as residents comb through the damage from the storm that killed seven people in Autauga County.

Hollon and his workers saw a massive tornado churning toward them. They needed to get to shelter — immediately.

Hollon said they ran into a metal shipping container near the back of his garage because the container had been anchored to the floor with concrete. Once inside, Hollon began frantically dialing his neighbor on the phone. But as they heard the garage being ripped apart, the call kept going to voicemail.

The storm passed and they emerged, only to find the body of his neighbor in the street, he said. Another neighbor up the road had also died, a family member said.

“I guess we did a lot better than most. We got damage, but we’re still here,” Hollon, 52, said as he walked amidst the remains of his garage, stepping through a field littered with battered cars, shattered glass, snapped tree branches, splintered wood and other debris. 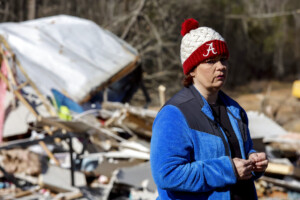 Leighea Johnson looks over what is left of her home after a tornado destroyed her home in Marbury. Her daughter and grandson where in the home and survived with minor injuries. (AP Photo/Butch Dill)

Leighea Johnson, a 54-year-old cafeteria worker who also lives in Autauga County, stood among the strewn remains of her mobile home. She pointed to a tall pile of rubble that she identified as her bedroom, bathroom and kitchen.

A swing set she had in her backyard was now across the street, mangled among some trees. Her trampoline had been wrapped around another set of trees in a neighbor’s front yard.

“The trailer should be here, and now it’s not,” Johnson said, pointing to a slab covered in debris, “And it is all over the place now.”

Autauga County officials said the tornado had winds of at least 136 mph and leveled damage consistent with an EF3. Authorities have said at least a dozen people were hospitalized and about 40 homes were destroyed or seriously damaged, including mobile homes that were launched into the air.

Residents described chaotic scenes as the storm spun toward them. People rushed into shelters, bathtubs and sheds as the winds bore down. In one case, a search crew found five people, trapped but unharmed, inside a storm shelter after a wall from a nearby house fell onto it.

Johnson said she was at work when she learned the storm would pass directly over her home. She quickly warned her daughter, who was with her 2-year-old grandson at home.

“I called my daughter and said, ‘You do not have time to get out, you’ve got to get somewhere now,”’ Johnson said, her voice cracking. “And she said, ’I’m getting in the tub. If the house is messed up I’ll be in the tub area.”

The call dropped. Johnson kept calling back. When she finally reconnected with her daughter, Johnson said she told her: “The house is gone, the house is gone.”

Her daughter and grandson had some cuts and bruises but were otherwise fine after a trip to the emergency room, Johnson said.

“I brought her home and tried not to let go of her after that,” Johnson said. “I lost a lot of things materialistically and I don’t have insurance but I don’t even care, because my child is all right.

“That’s really all that matters to me.”