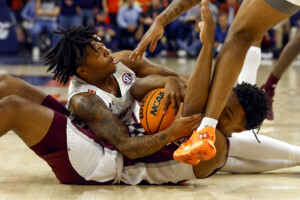 Auburn led by as many as 13 points in the second half, but Mississippi State cut the lead to four with 2:34 remaining. Green then hit a deep 3-pointer before coming away with a steal and a layup on the following possession.

The Tigers have now won three straight SEC games, thanks in large part to the resurgent play of their veterans. Williams and Flanigan are in the midst of the best scoring stretches of their four-year careers at Auburn, while Green is averaging nearly 20 points per game during the winning streak.