NWS: Autauga County Tornado on the Ground for 76 Miles, Nearly to Georgia 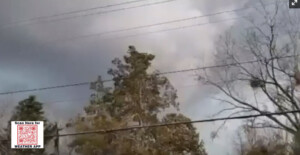 National Weather Service survey teams say the tornado that began in Autauga County last Thursday was on the ground for 76 miles.

That’s just one of the findings of this powerful and long-track tornado, which had a constant damage track from Autauga County through Elmore, Coosa and Tallapoosa counties before lifting in Chambers County.

The tornado is rated as an EF-3 with peak winds of 150mph. It was 1,500 yards wide at its maximum, which is nearly one mile. The storm killed seven people in Autauga County and injured 16 others.

The tornado touched down just east/southeast of Vida Junction in Autauga County and didn’t lift until it was one mile east of Penton in Chambers County. It was on the ground for one hour and 20 minutes, or from 12:48PM until 2:08PM CST.

The tornado started just east of U.S. Highway 82, where a manufactured home was rolled along Autauga County Road 40. Over the next two miles, the tornado rapidly strengthened as it approached Old Kingston, where EF-3 damage began along County Road 43.

That’s where at least three manufactured homes were destroyed, with their frames thrown up to 100 yards. A pickup truck was sent airborne and landed 120 yards away, where it caused a shallow crater.

The tornado became deadly as it hit several homes along Sandy Ridge Road. The frame of a manufactured home was thrown 250 yards. Nearby, several other manufactured homes that were in a cluster were shredded and thrown a considerable distance.

Trees were snapped off relatively close to the ground and partially debarked. Five people were killed along Sandy Ridge Road at three homes.

Similar damage continued northeast along County Road 140, where two fatalities occurred at two homes. At least five manufactured homes were blown away with their frames thrown considerable distances. Several vehicles were thrown, including a pickup truck that had its cab separated from its bed.

The tornado then caused massive tree damage, with what appeared to be stands of debarked trees along Autauga Creek.

In a three-mile stretch of the most severe damage from County Road 43 to County Road 42, wind speeds reached at least 150mph. It’s possible the winds were stronger.

The tornado was slightly weaker as it moved across County Road 57, where numerous trees were snapped and uprooted and several homes had significant roof damage. One site-built home had partial wall failure.

The tornado crossed Interstate 65 where trees were downed. In Pine Level, several homes had roof damage and a manufactured home was rolled off its foundation and onto County Road 68. Many trees were uprooted and snapped as the tornado crossed through the Pine Flat community, with more homes having roof damage and damage from fallen trees. A manufactured home was rolled and destroyed.

Similar residential structural damage happened in northwest Elmore County as the tornado crossed the Coosa River. It affected areas on Neely Road and Kelly Road on either side of the river as well as other nearby roads.

As the tornado crossed Grays Ferry Road at Titus, the number of snapped and uprooted trees increased. The tornado continued toward the Elmore/Coosa county line at U.S. Highway 231. Structural damage continued to be roof uplift or removal, along with damage from wind-blown debris and fallen trees.

A debris ball seen on radar in southern Coosa County matches what was seen on the ground, which was an extensive area of snapped pine trees on either side of McKissick Road between the communities of Speed and Equality. The number of trees show that the tornado was an EF-3 at this point.

More significant damage happened along County Road 18 where vehicles were moved or flipped, trees were snapped and site-built homes were heavily damaged with one destroyed, consistent with an EF-3 rating.

The tornado continued toward the Coosa/Tallapoosa county line where there was less intense timber damage.

Damage continued into Tallapoosa County with timber damage along Cedar Creek and Elkahatchee roads. The tornado had an EF-1 rating in this area.

The tornado crossed the northern part of Lake Martin before hitting more lakefront homes. Several homes were damaged on River Run Road and adjacent side streets, with some significant damage including roofs blown off and exterior walls collapsed or removed.

At least two homes were shifted from their foundation. Damage here was high-end EF-2, possibly due to the interaction of the tornado with the lake as well as the exposed nature of the homes.

The tornado also damaged homes along Lake Ridge Drive. It caused pockets of EF-1 timber damage as it crossed U.S. Highway 280. It moved across the rest of Tallapoosa County, causing timber damage in the EF-0 to EF-1 range, including in the Sessions area.

The tornado continued northeast into Chambers County, causing mainly timber damage in the EF-0 to EF-1 range. It weakened as it neared Highway 77 and broke up shortly after crossing County Road 114.