Attorney General Steve Marshall is warning tornado victims in the state to beware of scam artists – as they move forward in the recovery process. 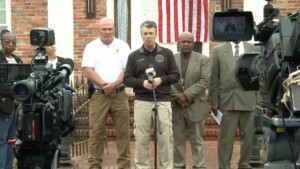 Marshall said during times like this – it’s important to remember – if it sounds too good to be true – it probably is.

Aaron Roper’s home was destroyed by the EF-2 tornado that ripped through Selma last week.

“My house is totally decimated. And it’s very hard to deal with,” said Roper.

“I’m just trying to pick up the pieces. And I’m saying my pieces are everywhere. And trying to do it while in a state of shock.

Roper’s situation is just like scores of other tornado victims in the area. And as they move forward and work to rebuild their lives – Attorney General Steve Marshall – is warning residents to protect themselves from being taken advantage of during this time of tragedy.

“We need to band together and keep the bad guys from harming those that have already lost so much,” Marshall said.

“And frankly, if you’re going to attack an Alabama citizen at this time, we need to make sure that your punishment is harsh — and it is swift,” he said.

“And we’re prepared to do it.”

Marshall says before paying a contractor for any home repairs – first, people should make sure the contractor is licensed to do the work. Second – get a quote in writing. And finally – get references.

Meanwhile, Roper says at this stage – he’s just trying to clean up his property – and salvage what he can.

“Just trying to do what we can over here,” Roper said.