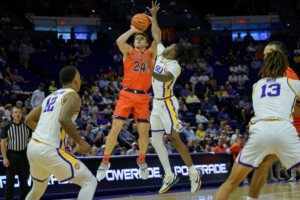 Wendell Green Jr. and Jaylin Williams each scored 14 points to lead No. 16 Auburn to its fourth straight victory, 67-49 over LSU on Wednesday night.

“This was a good road win for us,” Auburn coach Bruce Pearl said. “We had great balance. We knew that LSU had their backs up against the wall. We established ourselves early and led for most of the game. Wendell Green was special and Jaylin Williams built on what he has been doing.”

Auburn (15-3, 5-1) never trailed in the game and was seriously threatened in the early minutes of the second half. LSU, which scored just 21 points in the first half, finally came to life after the break.

Miller and Justice Williams led a 14-5 run which pulled LSU within two points at 37-35 less than five minutes into the second half. However, Auburn went on a 15-2 run and quickly regained control. Green scored five points and Lior Berman had a three-point play in the run for Auburn.

LSU never trailed by fewer than 12 points over the last 10 minutes of the game. After reducing its deficit to two points at 37-35, LSU made four field goals the rest of the game.

“We switched on defense really early (in the shot clock) because KJ is so good out there on the perimeter,” Pearl said. “We did not want to give him any free ones. That switching defense really bothered LSU on offense. We held them to 49 points on 29% shooting. That is spectacular.”

Both teams shot the ball poorly for most of the first half. With slightly fewer than eight minutes before halftime, Auburn held a 16-13 lead. Auburn then went on a 14-2 run to take a 30-15 lead. LSU reduced its deficit to 11 points and trailed 32-21 at the break.

“Give great credit to Auburn for their physicality on both ends of the floor,” LSU coach Matt McMahon said. “Their defense was terrific, very physical. Obviously you saw their ability to make it difficult for us to finish plays in the painted area. Auburn certainly dominated in the paint.”

Auburn improved its SEC record to 5-1, but it posted a double-digit victory for just the second time. In its last two victories over Ole Miss and Mississippi State, the Tigers were pushed to the final minutes, winning by nine points and six points, respectively. Auburn edged Florida by three points in its conference-opener. Pearl was pleased with his team’s balanced scoring in the 18-point victory over LSU.

The Tigers are right behind No. 4 Alabama in the SEC standings. Auburn, which is one game behind the Crimson Tide, will play its in-state rival twice in the final three weeks of the regular season.

Auburn will play a second straight road game at South Carolina on Saturday.