There’s a new sheriff in town in Marengo County.

Robert Alston, Jr. is now the county’s top law man — after serving six years as the Chief of Police — in Linden. 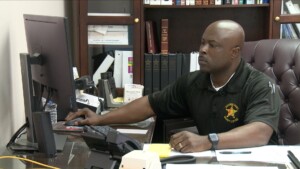 “It’s not about reinventing the wheel,” said Alston.

“It’s about taking what you have and building off of it. And building it to make it even better.”

Alston says his administration won’t be all about locking people up. But it will enforce the law without fail.

“It’s real simple. If you ain’t out here committing crimes, then there is no issue. But we are going to address crime.”

Alston says his top priority — and his biggest challenge — are one and the same.

“It’s gaining the trust of the people. You know, let them know that we’re not here to hurt you. We’re here to help you,” said Alston.

“By doing that then we’re able to develop relationships where people will be more open to talk to us you know. And help us help them.”

Putting more deputies on the street is another top priority.

Alston says that would help deter crime by increasing officer visibility around the county. Plus, reduce officer response time.

“When you call for law enforcement you don’t want to see law enforcement 45 minutes to an hour later. You know, you want them to get there at a reasonable time,” he said.

Residents are excited about what he brings to the office of sheriff.

“He really cares about the people. And he has the best interest at heart. He’s gon’ do an amazing job as sheriff,” said Kathelin Bishop.

Alston says he has an open door policy at his office. And his administration will be proactive — and transparent.

In addition to running the Marengo County Sheriff’s Office — Sheriff Alston is also responsible for running the county jail.