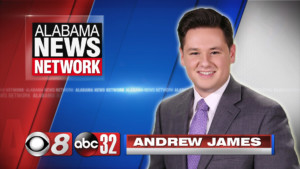 Andrew graduated from the University of North Carolina at Charlotte with a degree in Communication Studies and minors in Journalism and Spanish. During college, he was an active member of the school newspaper and student news broadcast.

Andrew began learning Spanish in kindergarten at a language immersion school in Charlotte. He made his first trip abroad in the eighth grade as part of an exchange program in Spain. He later returned to Spain during college, motivating him to earn a minor in Spanish.

From a very young age, Andrew dreamed of being a television news reporter when he grew up. He first interned at a news station when he was in the eighth grade. That experience set him on the path to making his dream a reality.

Outside of work, Andrew loves the outdoors. Whether it is running trails or hiking through North Carolina’s Blue Ridge Mountains, Andrew loves to spend as much of his free time in the mountains as possible. He is also a big fan of the Carolina Panthers, enjoys going to see his favorite bands in concert and loves spending time with his dog Summit.

If you have any suggestions of places to hike in Alabama or any story ideas don’t hesitate to reach out to Andrew!

Toyota is recalling about 373,000 Venza SUVs worldwide because a wiring problem could stop the side air bags from inflating in a crash. The recall covers Venzas from the 2009 through 2015 model years, including nearly 280,000 in the U.S.…

Arrest Made in 2016 Missing Person Case

An arrest has been made in the missing person case of Starr Mulder, according to Elmore County Sheriff Bill Franklin.  Mulder was last seen at her home in Wetumpka in June 2016. Sheriff…

COVID In Alabama: One Year Later

March 13, 2020 was a day that changed everything as Alabama's first coronavirus case was confirmed in Montgomery County.  Things like social distancing and face masks quickly became a big…

ALEA: Pedestrian Killed on I-65

A man died after being hit by a vehicle in Autauga County Thursday night. The Alabama Law Enforcement Agency says a 21-year-old man was hit while in the roadway around 7 p.m. Thursday.  State Troopers say the driver left the…

Alabama News Network is getting a first look at plans to expand Montgomery's Riverfront. The Riverfront Greenway Trail will connect the Riverfront to parts of North Montgomery.  Lois Cortell with the City…

The Brundidge Fire Department is investigating a large fire Tuesday morning at Car City on Highway 231. Fire crews were called the business in the 600 block of Highway 231 just before 5 a.m. Tuesday.  Officials say two buildings caught…

The Montgomery Bowl kicks off Wednesday night at Cramton Bowl.  Memphis and Florida Atlantic will face off in the first of two bowl games Montgomery is hosting this year. Executive Director Johnny Williams was live on Alabama News Rising with…